The train is a great way to travel from Udon Thani to Bangkok. Rail passengers have the option of either taking the daytime train and enjoying the scenery along the way or alternatively booking a sleeper berth on overnight train and waking up in Bangkok saving the cost of a hotel for the night and the inconvenience of the journey from either the airport or the Northern Bus Terminal into Central Bangkok.

There are 3 direct trains a day from Udon Thani to Bangkok.

Use the Search Box below to buy your train tickets from Udon Thani to Bangkok.

The most convenient, and popular service on this line is Train #26. This is because it is relatively quick (9 hours 30 minutes), departs and arrives at convenient times, and has a full range of seating types available including 1st and 2nd class air-conditioned sleeper berths. Train #76 is a Sprinter Train with A/C Seats, but no sleeper berths.

Udon Thani Railway Station is located on the Prajak Sillapakom in Udon Thani city centre. The train station is about 1 km from Central Plaza shopping centre and the bus station. In Udon Thani it is easy and cheap to catch a taxi or tuk-tuk to the train station if you are staying at a hotel which too far away to walk to. 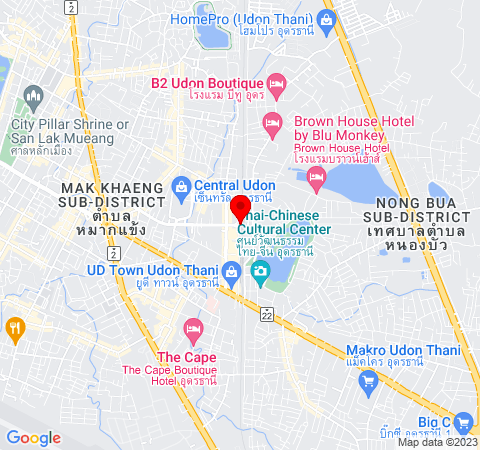 Bangkok’s old main train station, Hua Lamphong, in Bangkok’s Chinatown, not far from the Chao Phraya river. Aside from taxis and tuk-tuks, there are two easy public transport options from this railway station.

There are some very good hotels near Hua Lamphong Railway Station, which is in Bangkok’s Yaowarat (China Town) district. Yaowarat is an exciting area and the location of Bangkok’s most interesting temples, markets, and restaurants. Bangkok’s China Town has for many years been a much less popular area with foreign tourists than the Khao San or Sukhumvit districts of Bangkok. However, this is changing rapidly with better access and facilities being introduced to the China Town area by the city’s municipal authorities, including helpful English language signs having been installed on most major roads in the area. The hotels in the area have also improved with a thriving boutique hotel scene including some very well done conversions of Yaowarat’s wooden riverside homes, such as the excellent Loy La Long Hotel.