The Eastern & Oriental Express, which runs between Bangkok and Singapore, is one of the world’s most famous train services and features alongside other famous train services, such as the Orient Express and the Trans-Siberian Railway, near the top of the ‘must do’ list for real train enthusiasts. 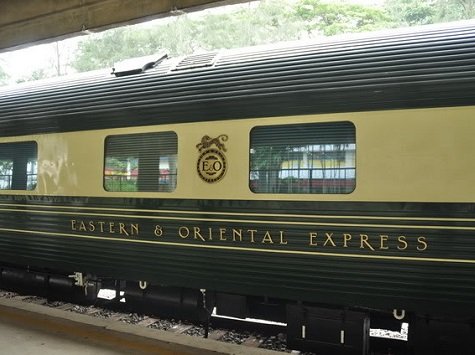 The route followed by the Eastern & Oriental Express, or simply the E&O as it is known, starts at Hualamphong railway station in Bangkok’s China Town and terminates at Woodlands Train Checkpoint in Singapore. This fantastic journey takes passengers in 5 star luxury along more than 2,000 km of railway through Thailand, Malaysia and then onto Singapore, with several stops on en-route. The journey takes 2 to 3 nights depending on what direction the train is travelling.

08:30 – Arrive Kanchanaburi (tour of the Death Railway and Bridge over the River Kwai)

22:40 – Arrive in Kuala Lumpur (an opportunity to walk around the old Moorish style railway station)

11:00 – Arrival in Singapore where the E&O terminates 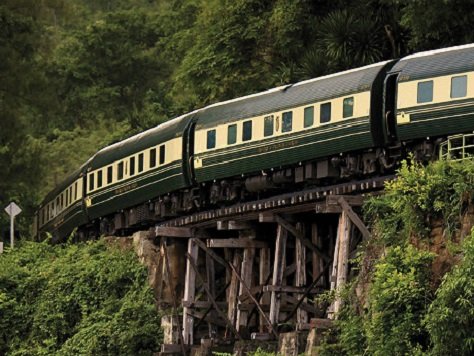 22:55 – Arrive in Kuala Lumpur (an opportunity to walk around the old Moorish style railway station)

10:45 – Arrive in Kanchanaburi (tour of the Death Railway and Bridge over the River Kwai)

16:45 – Arrival in Bangkok where the E&O terminates

Accommodation On Board the Eastern & Oriental Express

The train which used for this service started life in 1972 as the Silver Star service in New Zealand. Since then the train has been re-gauged (from 1,067 mm to the Thai-Malaysian Gauge of 1,000 mm) and the interior of the train carriages re-designed by Gérard Gallet, the principle designer behind the interiors of the famous Orient Express to Venice and the luxury British Pullman Service. The standards of accommodation, food, and service on the E&O are broadly equivalent to these other more expensive European services – indeed some say they are better, making the E&O excellent value for money. As many things, what you might not be able to afford in Europe you can almost certainly afford in South East Asia. 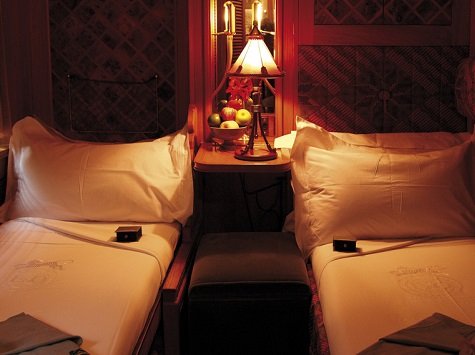 There are three different types of cabin to book on the train. All cabins feature sleeping for two people, except for a small number of Pullman cabins which are designed for a single person allowing people travelling alone to book without needing to pay a single supplement.

These cabins have an internal size of 19 sqm. At night the seating is converted into an upper and lower bunk. This is down by the train stewards whilst guests are dining. The cabin also has a private toilet and shower, and guests have access to a 24 hour a day steward service.

The Presidential Suites (of which there are two on every train) are twice the size of the Pullman Cabin, at an impressive 38 sqm. The average Bangkok hotel room is 28 sqm, so this is a large room for South East Asia, especially for a train inside which space is always at a premium. In addition to private toilet and shower the Presidential Suite also features a dressing room with wardrobe and built-in safe.

Facilities On The Eastern & Oriental Express

The ticket price includes breakfast served to your room, or taken in the observation car. Lunch and dinner are served in one of two restaurant cars, and were that not enough, afternoon tea with cakes is served in your cabin.

Tea, coffee and water are included in the ticket price, but alcoholic drinks are not. A bottle of wine starts at around $40. All prices on board are in US dollars. You can pay in other major currencies, but your change will be given in US dollars.

The E&O has a piano bar where guest can get a drink from early morning to late at night. Entertainment, such as traditional Thai and Malaysian dancing is provided nightly, and when this stops the man on the piano starts. The bar car is the social hub of the train with most passenger choosing to mingle with their fellow train passengers after dinner.

This car has a small library and comfortable seating. It also has some table and seating where passengers travelling in group can private privately together.

This is on open sided car where passengers can go to enjoy unobstructed views of the scenery and experience the sounds and smells of the often jungle like environments that the train passes through. Smoking is permitted in the observation car, but not elsewhere on the train.