Hua Lamphong is the local name for Bangkok’s main train station. It serves as the main hub for intercity and international train services in Thailand.

All train lines, except for the line to Kanchanaburi, run from this station. This is where you need to come to catch a train to most of the popular destinations such as Chiang Mai, Surat Thani, Ayutthaya, Nong Khai or the border with Laos, Cambodia or Malaysia. If you want to go to Kanchanaburi you need to travel across the Chao Phraya (the main river in Bangkok) to Bangkok’s other train terminus, Thonburi train station.

Use the Search Box below to buy your Thailand Train Tickets.

Surat Thani is the nearest train station to the islands of Koh Samui and Koh Phangan. There is cheap and efficient transport direct from Surat Thani train station to Koh Samui and Koh Phangan, as well as to Koh Tao. This is one of the busiest routes on the train network particularly around the Full Moon Party period. Booking in advance is recommended.

The journey to Chiang Mai takes passengers through some of the most beautiful parts of Thailand. For this reason we recommend booking the very popular 08:30 departure, which is the only train service from Bangkok which travels through the hills South of Chiang Mai during the daylight hours.

Other Journeys from Bangkok

Hua Lamphong Station is on the Blue Line of the MRT (metro) system. The MRT Blue Line runs through the City up to Bang Sue train station with 15 stops along the way, including Silom and Sukhmvit. From the MRT Blue Line there are interchanges with the BTS (skytrain) overground train network at Silom, Sukhumvit and Chatchuchak Park. There is also an interchange at Phetchaburi MRT station for the Airport Link to Suvarnabhumi Airport, Bangkok’s main international airport.

The Khao San Road area is not on either the BTS or MRT network, so its either a taxi, bus, tuk-tuk, or the Chao Phraya Express Boat and a 16 minute walk to get to the station. The nearest Chao Phraya Express Boat pier to the Khao San Road is Phra Athit Pier on the Phra Athit Road. Boats depart every 15 to 20 minutes minutes going South and costs less than 20 THB per person one-way. For Hua Lamphong Station you need to alight at the Marine Department Pier and walk about 16 minutes to get to Hua Lamphong Station. Be warned there are some difficult roads to cross on the way from the pier to the station and you need timing and patience to do it safely.

If you find yourself confused and do not know where to go to buy a ticket or catch a train, do not panic there is lots of help available from helpful English speaking station staff.

You can transport bicycles on trains from Bangkok Hua Lamphong Station if the train in question has a Freight Carriage. Some trains do, others do not. Unlike other forms of cargo, in Thailand you need to load and unload bicycles yourself which means you need to travel on the same train.

To purchase a ticket for a bicycle go to the Freight & Parcel Office at the train station after you have purchased your own train ticket.  Keep the ticket for the bicycle safe as you will need to show the ticket at your destination in order to collect your bicycle. For more information see our guide to tansporting bicycles on Thailand Trains.

550 metres walk from the train station is Wat Traimit which is famous for its Phra Phuttha Maha Suwana Patimakon statue: a solid gold Buddha weighing 5,500 kilograms making it the largest solid gold statue in the world with a value in excess of $250 million dollars.

The amazing history of the large golden Buddha is that the statue had been covered in clay since the 1700s and it was not until they dropped the statue attempting to move it in 1955 that the monks discovered that it was made of solid gold. The temple has recently been rebuilt and is itself worth a visit. 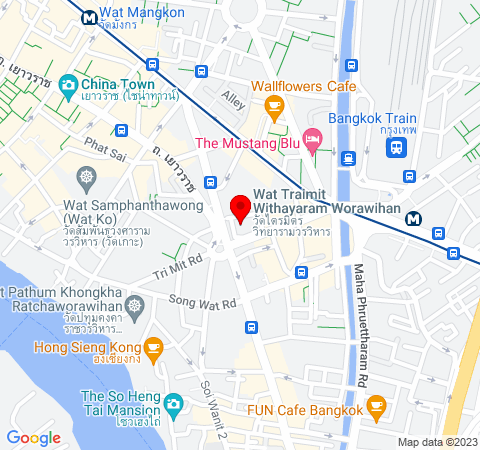 1,200 metres walk from the train station is the Pier Number 4 (The Marine Department Pier) of the Chao Praya Express Boat Company. For between 8 and 40 THB you can travel to any pier along the Chao Phraya River, which runs the length of Bangkok, making this one of the cheapest river cruises in the World. The Chao Phraya Express Boat is one of the main commuter routes in Bangkok with stops at major river side destinations of importance. Alight at the Pier Number 8 (Tha Tien Pier) for the Grand Palace, Wat Po and the connecting cross river ferry to Wat Arun.

1,300 metres walk from the train station is Sampeng Lane, one of the biggest markets is the Yaowarat (China Town) district. Sampeng Lane is also one of the most exciting markets in South East Asia and must do for many travellers. The market is long, narrow and split into sections and ending in Bangkok’s Little India area. Sampeng Lane is an intense experience and not for the ‘faint-hearted’, although you can choose to do only short section of the market by enter and exiting via the many side streets leading off Sampeng Lane. 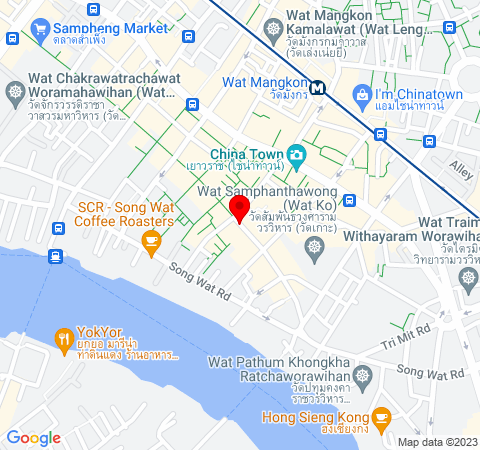 4. See the exhibits at the Thai Railway Museum

And finally, if you do not have much time, or don’t fancy walking, at least check out the Railway Museum. This small museum is located inside the station building. The entrance is on the left of the grand entrance to the station but the doors onto the concourse.

This is a very small museum and it will take you no more than 15 minutes for a good look at the exhibits. It is free and open every day from 10.00 to 18.00 (except Sundays, Mondays and public holidays).

At the far end of the station concourse there is row of ticket counters selling tickets for travel on the same day. For advance booking use counters 15 to 22 at the top right hand side of the station.

For the route between Bangkok and Surat Thani (for ferries to Koh Samui and Koh Phangan), especially during high season or the Full Moon Party period, you often need to book tickets more than a week in advance.

State Railways of Thailand initially announced that the plan was to close Hua Lamphong as a functioning train station in 2021, and turn it into a museum. Hua Lamphong Railway would have been in use for 105 years by that time. A new station has bee constructed near the existing Bang Sue station to the North of Hua Lamphong railway station, which the State Railways of Thailand had planned to move all services to. Concerns about traffic congestion around the station, which is in the busy Yaowarat (China Town) district, were the official reasons given for the move.

Update: Following opposition to the plans to close Hua Lamphong Railway Station in its entirety, in December 2021 the State Railways of Thailand has announced that a limited number of long and short distance train services will continue to operate from Hua Lamphong Railway Station in 2022, whilst the majority of services will still move to the new station which is called Bang Sue Grand Station.

To reach the hotel from the station, turn right on coming out the main entrance of Bangkok train station, go across the car park and over the closest canal bridge. The hotel is directly in front of the over side of the canal bridge, across the road.

This long established budget hotel has basic rooms with free WiFi, air-conditioning, en-suite bathroom, balcony and satellite TV from 980 THB per night. For the price it is great value for money and the views over the train station and the city are some of the best in any Bangkok hotel.