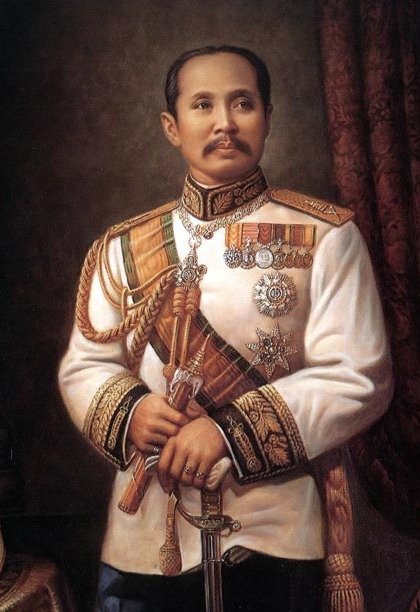 Father of the Thai Railway Network

King Chulalongkorn (Rama V) is considered the ‘father’ of the modern Thai Railway system, as it was during his reign that the first railway lines were built in Thailand, and under his patronage the creation of what is now the State of Railway of Thailand.

King Chulalongkorn reign from 1968 to 1910, although during the first five year of his reign (1868 to 1873) much of the day to day decision making in Thailand was undertaken by the Regent Si Suriyawongse. Upon his instatement as King in his own right, King Chulalongkorn set about undertaking a wide range important reforms to modernise Thailand, including the construction of a railway system. Prior to his second coronation in 1873, King Chulalongkorn had travelled widely and taken note of the way the British had administered their colonies in India, Singapore and Indonesia.

Why the Railway was Important to Thailand

To fully grasp the reasons why Thailand’s Railway system developed in the way it did, it is helpful to consider the foreign policy challenges Thailand was facing at that point. During the reign of King Chulalongkorn, and his father King Mongkut, Thailand’s sovereignty was under threat from the colonial powers of Britain, France and Germany. Whilst Thailand was only ever involved in a military conflict with France (which briefly invaded parts of Eastern Thailand) Britain and Germany were also treated with suspicion. Both colonial powers has offered to assist Thailand in building a railway system. However, both King Mongkut and King Chulalongkorn has shrewdly realise that this offer was made in the interests of Britain and Germany who wanted to extend their influence in Thailand. Britain in particular wanted to connect Thailand to India by train and this (Thailand’s kings suspected) would have provided Britain with the logistical support necessary for an attempt to take Thailand by force.

For these reasons King Chulalongkorn decided to go it alone on the construction of Thailand’s railway system hiring Western experts as necessary but not allowing foreigners to control the railway system. The construction of Thailand current railway next work proceeded slowly and using the 1.435 metre standard gauge track which was, perhaps foolishly, replaced by the 1 metre gauge which was being widely used across South East Asia at the time.

Work on the Northern line increased in pace thereafter and the track had reached Pitsanulok by 1907, but this was fast enough and it was a full 6 years after King Chulalongkorn’s death in 1910, that the track reached Chiang Mai. In 1896 King Chulalongkorn, however, had done more than merely build the first train lines and purchase the first trains, he had also created the Royal State Railway organisation, the fore runner of the current State Railway of Thailand, thereby laying the foundation of public ownership of Thailand Railway system for generations to come. King Chulalongkorn truly was the founding father of Thailand’s railway system.