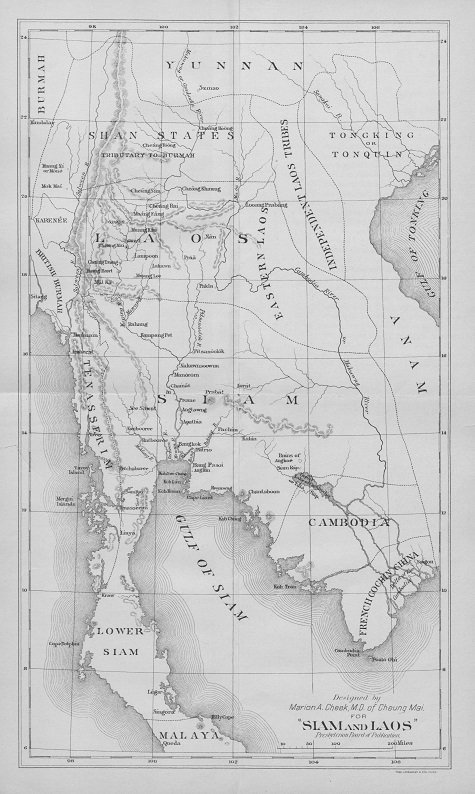 No survey no railway line

A critical requirement in the construction of a railway system is a map showing national borders, location of towns and terrain. Much of Thailand (or Siam as it used to be known until the early Twentieth Century) is either mountainous or water logged for much of the year. This makes railway construction a challenging prospect.

British Citizen appointed to do the work

At the request of the Thai Government, and as part of a broader trend of modernisation initiated by social reformer King Chulalongkorn (Rama V), British citizen James McCarthy was appointed Director-General of the newly created Royal Thai Survey Department, established on Sept 3, 1885.

James McCarthy’s work surveying and creating Thailand’s accurate maps began a few years before his formal appointment as Director-General in 1881 and continued 12 years through to 1893. James McCarthy had been working as an engineer and map-maker in India prior to this and was sought out by the Thai Government to undertake the task of making a map accurately depicting Siam’s land borders on the recommendation of another British citizen, Henry Alabaster, who was at that time employed as personal adviser to King Chulalongkorn,

James McCarthy gave an account of his time working in Siam in his book Surveying and Exploring in Siam (first published in 1900). At this time Thailand’s border areas were dangerous places to be and James came close to death on more than one occasion. In addition to tigers, snakes and other wild animals, many people working with James died from disease and fighting with the Haw Chinese, whom at that time Thailand was at war. The Haw Chinese were an armed ethnic group from Chinese which periodically raided villages on the Laos border and threatened the territorial integrity of the country.

The maps had a lasting significance

The dangers James McCarthy and his men enduring resulted in the production of maps and surveys which were used for a number of important purposes, including the planning for Thailand’s railway network. Construction on the first stretch of which, from Bangkok to Ayutthaya, started in 1891 near the end of James McCarthy’s time as Director-General of Royal Thai Survey Department. Whilst James McCarthy did not build a railway, he is rightly considered a founding father of the Thai Railway system because he created the first maps and surveys used to plan the railway system.