31 October 2020: This week a signing ceremony was held at Government House in Bangkok to mark the entering into of a 50 Billion Thai Baht contract to construct a high speed railway line between Bangkok and Nakhon Ratchasima.

Back in July 2020 we reported that the largest of a series of contracts to build the Bangkok to Nakhon Ratchasima high speed railway line was about to be put out to tender. The tender process has been completed and the contract has been awarded to two Chinese state owned companies: China Railway International Co and China Railway Design Corporation. The contract represents just under 28% of the total budget for the project (179 Billion Thai Baht) and will involve the supply of the train tracks, train carriages, signalling systems, operating the line and training personnel.

This is a big project involving installing 253 km of new train track which is scheduled to be completed in 2026. The line will pass through 6 stations, starting at Bang Sue Central Station, which is still under construction and a 5 further stations: Don Muang, Ayutthaya, Saraburi, Pak Chong and finally Nakhon Ratchasima. A new more modern railway station near to to Don Mueang Airport is near to completion as is Bang Sue Central Station, but the other 4 railway stations are going to require significant upgrades as part of the project.

The Bangkok to Nakhon Ratachasima high speed railway line is a part of the larger Pan Asia Railway Network project. The aim of the Pan Asia Railway Project is connect Kumming in Southern China to Singapore via three routes, one through Myanmar, one through Laos and another through Vietnam and Cambodia, before all converge on Bangkok for the journey through Malaysia to the final destination of Singapore. 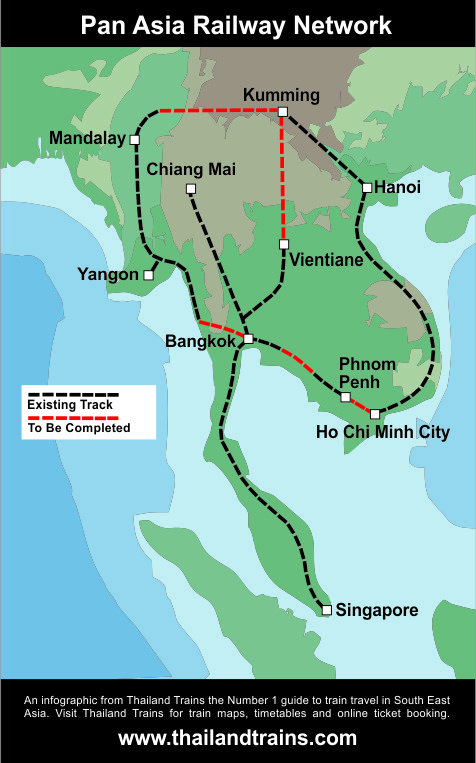 This ambitious project has been moving at different rates in different countries. The Chinese end of the project started first. Kumming has a massive, but under used, railway station already constructed with the intention that it becomes a major transport hub for onward travel in China and westwards into Tibet and Russia. The section of line through Laos, which is the most different engineering project of the whole network, is due for completion in December 2020. This means there is a pressing need for the Bangkok to Nakhon Ratchasima line to be completed as well for the extension from Nakhon Ratchasima to the Laos border at Nong Khai to get underway. Work is progressing slowly on improving the train line from Bangkok south to the border with Malaysia. Construction in other counties on route has not commenced in any significant way. Myanmar and Vietnam haven’t really started doing work on their sections of the line, for a variety reasons. Cambodia is still struggling to make existing train lines on the route move efficiently, and political turmoil in Malaysia has delayed construction of the important Kuala Lumpur to Singapore high speed line. Progress on Thailand’s high speed railway network may be slow but it is still moving faster than in any other ASEAN country other than Laos.

Use the Search Box below to buy your Thailand train tickets:

You book tickets for other train journeys in Thailand, as well as Vietnam, Malaysia, China, Myanmar and India by changing the origin and destination of travel in the Search Box above.