By train the journey from Bangkok to Buri Ram is scheduled to take from 5 to 7 hours depending upon which train you take. Passengers on this route have a choice of either travelling during the day to enjoy the great scenery on route, or travelling on an overnight train, some of which have inexpensive sleeper berths available to book online.

There are 6 direct daily train services from Bangkok to Buri Ram.

Use the Search Box below to buy your train tickets from Bangkok to Buri Ram:

The advantage of purchasing your train ticket from Bangkok to Buri Ram online in advance of travelling is that the best seats, particularly 1st and 2nd Class A/C Sleeper seats, often sell out in advance of the day of travel. Train services on the North Eastern line get most busy during period before and after Thai National Holidays, such as the Songkran festival, when Thai people use the train to return home from working in Bangkok to spend the holiday with their families in their home town or village. 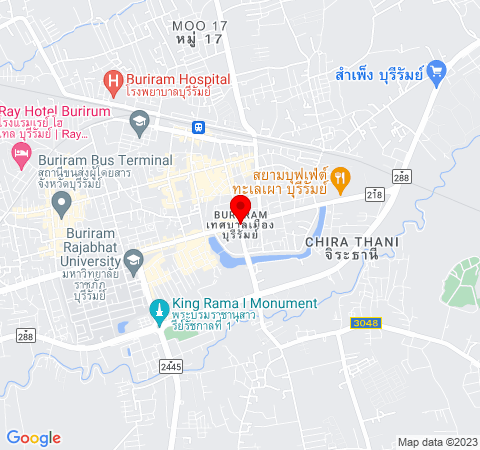 Buri Ram is best known for two thing: Buriram United Football Club, which is Thailand’s most successful football team, and the ancient Khmer period temples at Phanom Rung Historical Park and Prasat Hin Mueang Tam, some 64 km to the South of Buri Ram. There are few places to stay near to either Phanom Rung Historical Park or Prasat Hin Mueang Tam and as a consequence most visitors to these sites will stay in Buri Ram overnight as Buri Ram is the closest large town.

Phanom Rung Historical Park and Prasat Hin Mueang Tam were constructed during the 9th to 12th Centuries when the area was inhabited by the Khmer people, who were also responsible for the construction of Angkhor Wat in Cambodia. Phanom Rung Historical Park and Prasat Hin Mueang Tam are Hindu temples constructed in the distinctive Khmer style out of large pieces of quarried stone with triple prangs (steep spires) to represent the three most important deities in the Hindi religion: Shiva, Brahma and Vishnu. Phanom Rung is the most impressive of these temples. Phanom Rung is located on top of an extinct volcano and is accessible via a long stone stairway. The stairway has three tiers. At the top of each tier is a stone bridge with a rail in the design of the mythical Naga serpent. After ascending the stairway visitors pass into a walled inner sanctuary containing a single large tower with some smaller temple building adjacent to it. The structural elements of the temple have elaborate designed carved into them. Famously one of the lintels was stolen from the temple in 1960 and ended up in a museum in Chicago, to be later repatriated back to Thailand and reinstalled at the temple following the intervention of the Thai Government and financial assistance from a charity based in the United States.