There are 5 direct trains per day from Hat Yai to Phetchaburi.

Use the Search Box below to buy your tickets from Hat Yai to Phetchaburi:

All the trains on this route, except Train #42 departing at 16:38, have sleeper berths available. Train #42 is a three carriage sprinter train and a meal is included in the ticket price. Sprinter trains are the fastest trains in Thailand. The best quality train service on this route is Train #32 which uses the newest train carriage operated by the State Railways of Thailand.

Booking online in advance cost 250 THB more than buying your ticket at a train station in advance. 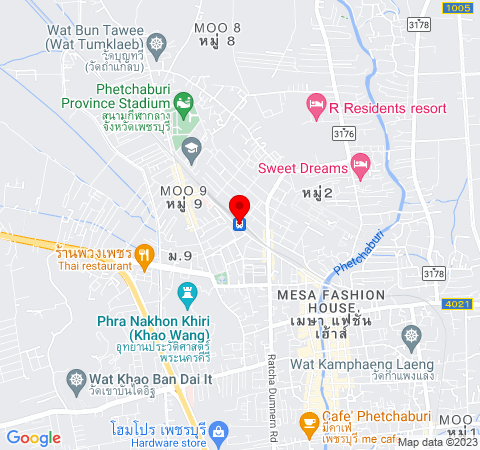 Phetchaburi is a small town which is very popular with Thai tourists, but generally overlooked as destination by foreign visitors in favour of the better known towns of Hua Hin, Cha-Am and Pattaya. The reason Phetchaburi is popular with Thai visitors is because of the historic temples and palaces in the town, the food which is made there, and the nearby beaches of Chao Samran and Puek Tian Beach.

The main attraction is Phetchaburi is the Phra Nakhon Khiri Historical Park, known locally simply as Khao Wang, which is in the centre of the town. Khao Wang is a hill top palace complex with a museum. Great buildings and great views make a visit to Khao Wang a rewarding experience. Two temples in Phetchaburi, Wat Mahathat Worawihan and Wat Kamphaeng Laeng are also well worth visiting. Phetchaburi is also popular with Thai visitors because of the food associated with the town, in particular khanom wan (Thai desserts), noodle soups and mon cuisine.