By train it takes 6 to 10 hours to travel from Uthumphon Phisai to Bangkok depending upon which train you take. Many of the trains which travel overnight have sleeper berths available, although you may want to travel during the day as the scenery is good on this route, particularly between Nakhon Ratchasima and Ayutthaya.

There are 6 train services a day from Uthumphon Phisai to Bangkok.

Use the Search Box below to buy your train tickets from Uthumphon Phisai to Bangkok.

Train #24 is the premium train service on this route, and the most expensive one, as it uses the new style of passenger carriages brought into service in November 2016. The fastest service, Train #22 departing at 15:48, is a three carriage sprinter train and food brought to you at your seat is included in the ticket price.

Train tickets from Uthumphon Phisai to Bangkok purchased online are 250 to 300 THB more expensive than buying the tickets the train station.

The reason you might choose to pay more to buy online is that tickets often sell out before the travel of travel and at busy times need to be purchased several weeks ahead of the day you plan to travel. 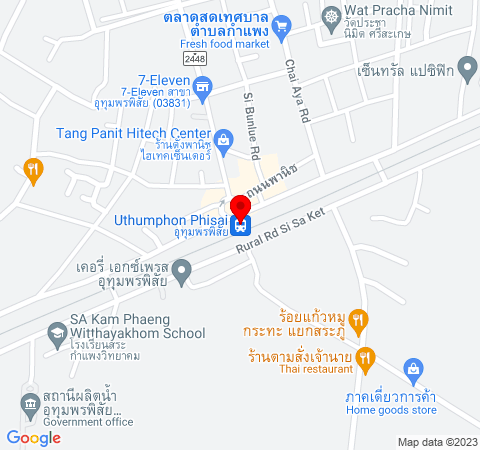 About Train Stations in Bangkok

Most foreign visitors to Bangkok only ever use Bangkok’s own main train station, Hua Lamphong, which was the start and finish point for nearly all railways lines in Thailand. Depending on your final destination, however, Hua Lamphong Railway Station may not be the best station at which the leave the train. Hua Lamphong Railway Station is located in Bangkok’s China Town area near to the Chao Phraya River. If you are planning to travel to the Khao San Road area of Bangkok, or to visit the Grand Palace or the temples in Rattanakosin Island, or to stay in China Town, then it makes sense for you to continue your journey all the way to Hua Lamphong at the end of the train line. However, if you are planning to travel to most other parts of Bangkok, or to either of the two airports in Bangkok, then you will find it quicker to leave the train at Bang Sue Train Station and continue your journey by local transport.