By train the journey from Bangkok to Ban Krut is scheduled to take between 7 and 8 hours depending upon which train you take.

There are 5 direct trains per day from Bangkok to Ban Krut.

Use the Search Box below to buy your train tickets from Bangkok to Ban Krut:

After paying for your ticket you will receive a booking confirmation and then a ticket will be sent to you by e-mail. Tickets printed on special paper are no longer required to travel on trains in Thailand. You can either print out your own ticket or you show your ticket to the train conductor on a mobile phone or a tablet or laptop computer.

It costs 200 THB to 270 THB more to buy a ticket in advance online than it does to buy your ticket at a train station in Thailand.

Trains from Bangkok to Ban Krut travel on the busy Southern Railway line which connects Bangkok to Sungai Kolok on the border with Malaysia, via stops on route at major stations such as Hua Hin, Chumphon (for ferries to Koh Tao), Surat Thani (for ferries to Koh Samui and Koh Phangan) and Hat Yai, which the largest city in Southern Thailand. Around public holidays and the high season for tourism in the South of Thailand train services heading south from Bangkok can become very busy and booking in advance is recommended for most seat types except 3rd Class fan seats which you can normally buy on the day of travel from the train station. 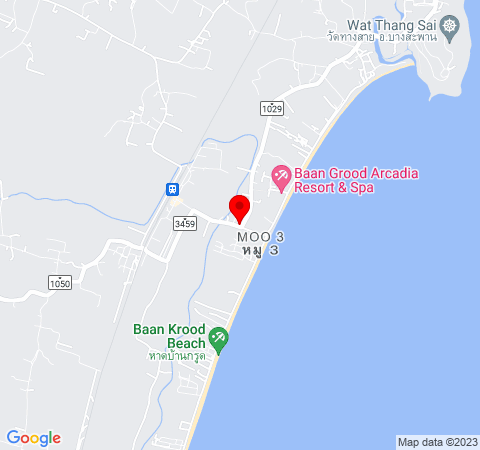 By train, the distance from Bangkok Hua Lamphong Railway Station to Ban Krut is 376.59 km. Because Ban Krut is relatively close to Bangkok it attracts fairly large number of Thai visitors who come to Ban Krut for a short breaks during public holidays. Ban Krut is absolutely packed with mostly Thai visitors during the calendar New Year and during the Songkran holiday in the middle of April.

What attracts visitors to Ban Krut over other resort towns closer to Bangkok, such as Hua Hin and Cha-Am, is the beautiful beach and the relaxed atmosphere. Ban Krut does have resorts and restaurants, but not that many of them and those they do have are excellent value for money. What is completely absent from Ban Krut are the types of mass tourist attractions, such as water park and floating markets, and shopping centres that appeal to many of the foreign tourists who come to Thailand on one or two week holidays. This said, Ban Krut does have one major attraction which draws in large tour groups and that is Wat Thang Sai, which is a very attractive hill top temple with a large golden Buddha statue and magnificent views along the beaches running both north and south from hill upon which the temple is perched. As well as Wat Thang Sai many visitors enjoy looking around Ban Krut town (the part near to the train station) which is notable for its wooden houses. From an architectural perspective, time has stood still in Ban Krut town as many of the building are made of wood in a style which was common across Thailand 100 or more years ago. Ban Krut also has a well known cave temple, Wat Tham Khiri Wong, which is filled with Buddha images. Ban Krut might not suit families or younger travellers but it is a great place to relax for a few days, so long as these days don’t fall on a Thai public holiday.