There are 8 direct trains per day from Bangkok to Bang Saphan Yai Railway Station.

Use the Search Box below to buy your train tickets from Bangkok to Bang Saphan Yai:

The two best train services to take are Train #43 and Train #171. Train #43 departing at 08:10 is a three carriage air-conditioned sprinter train which travels relatively quickly, although the carriages can feel a little cramped and it can be awkward to carry luggage on and off the train as the central aisle is very narrow. Train #171 departing at 13:10 arrives mid-evening at 19:59 and has more spacious train carriages. The other train services are less convenient because of the later arrival times mean that restaurants will be shut for the evening by the time you get to Bang Sapan, particularly if the train is delayed, and it may be difficult to find onward transport at that time of night.

It costs 270 THB more to buy a ticket in advance online than it does to buy your ticket at a train station in Thailand.

Booking in advance is a good idea during busy times for travel in Thailand. Bang Sapan Yai is Thailand’s Southern train line, which runs from Bangkok to the border with Malaysia via popular destinations such as Hua Hin, Chumphon (for ferries to Koh Tao), Surat Thani (for ferries to Koh Samui and Koh Phangan), Hat Yai and the Southern provinces. Whilst Bang Sapan Yai is not a particularly popular destination the other destinations on this route are, and trains heading south from Bangkok can become very busy during the tourist high season, Thai public holidays such as Songkran when Thai people visit their families, and before the monthly Full Moon Party in Koh Phangan.

Bang Sapan is a lesser known beach resort town which is popular with Thai tourists during public holidays. The main draw for the majority of foreign tourists is the island of Koh Thalu, located 20 minutes off the coast by speedboat. Speedboat services depart from Ban Maw Phraw Pier in Bang Sapan Noi to Koh Thalu at 10:00 every day with a return trip at 14:30. You can stay overnight at Ko Talu Island Resort or enjoy the snorkelling, the beaches and a canoeing adventure on a day trip. Koh Thalu is a great little island which is not connected to mains electricity and has few facilities, but some interesting coastal caves to explore.

Bang Sapan itself has some great beaches located between Bang Sapan Yai and Bang Sapan Noi and this is the area where you find the best restaurants and resort. Bang Sapan Yai and Bang Sapan Noi both have small town centres with shops, ATM machines and place where you can rent motorbikes. You will need your own vehicle to get around or alternatively contact one of the resorts and get them to pick you up from the train station and arrange a car and driver for any excursions you might want to take. Other places to visit nearby are Wat Tum Marong temple which is located within a large cave, the lively Tuesday and Thursday Night Markets near Bang Sapan Yai Railway Station, and the Sai Ku and Ka-On waterfalls which are a short drive away from Bang Sapan. Bang Sapan is also popular for fishing as there are a number of inland lakes and reservoirs which are well stocked with fish in the area. Bang Sapan also has a very inexpensive golf course. 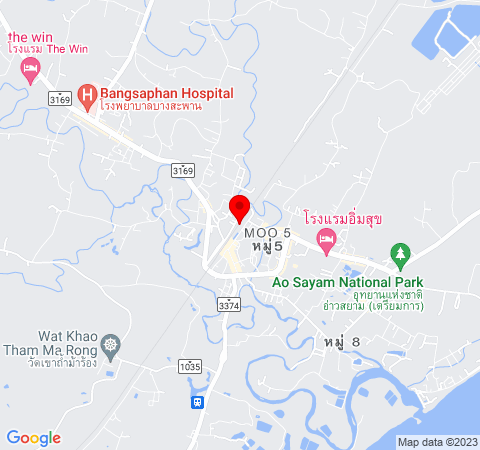