The best way to travel overland from Bangkok to Koh Tao is to book a sleeper seat on an overnight train from Bangkok to Chumphon. On arrival at Chumphon in the morning you can then take a joint bus and ferry service direct from outside the railway station to Koh Tao.

Stage 1: Train from Bangkok to Chumphon

Train times from Bangkok to Chumphon.

Stage 2: Bus and Ferry from Chumphon to Koh Tao

For the for first stage of the journey to Koh Tao you board the train at Krung Thep Aphiwat Central Terminal Station (also known as Bang Sue Grand Station).

For the second stage of the journey to Koh Tao passengers need to leave the train at Chumphon Railway Station to board a bus to one of the ferry terminals with services to Koh Tao. 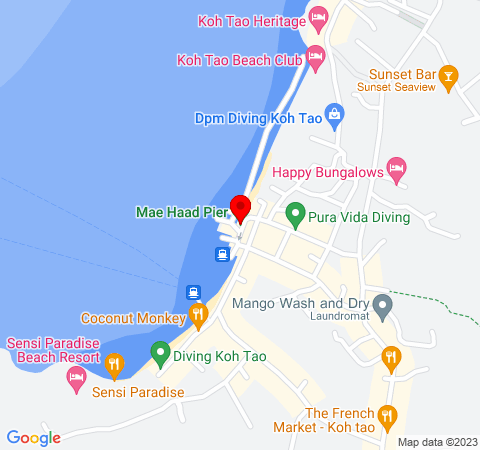 About Travel to Koh Tao

Trains from Bangkok to Chumphon fun from 08:10 until 22:20. If you catch one of the earlier trains then you need to spend the night in Chumphon. We recommend the Euro Boutique Hotel which is a budget hotel only 850 metres walking distance from Chumphon Railway Station. The most lively place to eat in Chumphon is Papa Seafood opposite the railway station which has live music in the evenings.

The trains which depart from Bangkok in the early afternoon, however, are inconvenient because you end up arriving at Chumphon Railway Station in the middle of the night and have no option but to spend several hours waiting on the train platform, or on the street in front of the station, until the first transfer service to Koh Tao departs at 06:00. For this reason the best overnight train to take is Train #85 departing at 20:10, and scheduled to arrive at 05:52 (probably later as the train is often delayed). Train #85 has 1st and 2nd class A/C sleeper berths and a restaurant car.

The cheaper of the two ferry services is the Songserm. Songserm has recently invested in new ferries which are better than the ones they previously had in service when Songserm had a reputation for awful service. The service provided by Songserm has improved a bit although the sea crossing to Koh Tao still takes a painfully slow 2 hours 45 minutes in a fairly cramped cabin with moderately effective air-conditioning. You can, however, sit outside on the Songserm which makes the journey more pleasant.

Next read about Travel from Koh Tao to Chumphon Train Station