There are seven direct train services per day from Den Chai to Bangkok.

Use the Search Box below to buy your train tickets from Den Chai to Bangkok.

The best overnight train is Train #10 departing from Den Chai at 22:36 which uses the new train carriages put into service by the State Railways of Thailand in November 2016. 1st and 2nd Class A/C sleeper seats on available on Train #10 as well as a smart modern restaurant car with seating. Please note, however, that Train #10 has no freight carriage so you cannot transport bicycles on this train or other items of oversized luggage.

The advantage of booking online is that you guarantee your seat without needing to travel a train station before the day of travel to buy the tickets. Train tickets in Thailand, particularly on better trains and for A/C Sleeper seats, often sell out in advance. Around the time of Songkran (the middle of April), the Loi Krathong (early November) and the Western Calendar New Year (end of December) large numbers of Thai people use train services to visit their families in their home town and village. At these times it is not uncommon for all train seats to be fully booked out a week or more in advance. The train in Thailand also get busy during Chinese holidays and Easter and Summer holiday times in Europe.

Travel from Phrae to Den Chai

It’s 28.8 km from Phrae Bus Station to Den Chai Train Station. By road the journey should take around 31 minutes.

There are two ways to travel from Phrae town to Den Chai. The first option is to take a minivan or bus from Phrae bus station which is located off the Yantrakit Kosol Road in the Northern end of Phrae town centre. Minivans leave frequently throughout the day whenever they are full. There are also a variety of bus services. Expect to pay no more than 50 THB. The second option is to take a shared songthaew taxi from in front of Phrae Vocational College on the Yantarakit Kosol Road. Shared taxis to Den Chai do not run on a fixed schedule and should cost 40 THB per person for the journey from Phrae to Den Chai train station. 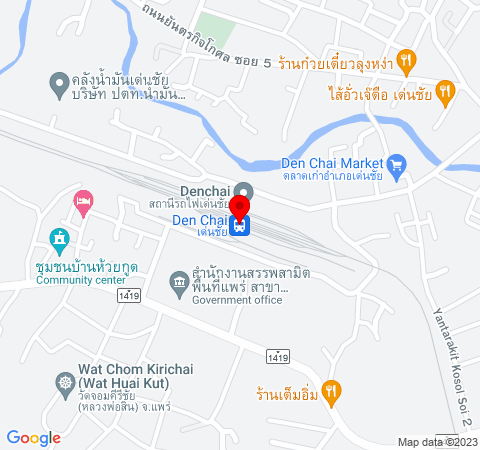 Bangkok’s main train station is known locally as Hua Lamphong which is also the name of the Metro (MRT) station the entrance to which is located to the right hand side of the station building as you leave trains coming into Bangkok. Bangkok’s Metro system connects with its elevated railway system (the BTS) and also the Airport Link which runs from Central Bangkok to Suvarnabhumi International Airport. If you are planning to go to the Khao San Road then either take a meter taxi from the official taxi rank which is near to the entrance to the MRT station or if you want to save money and have an adventure at the same time then walk slightly over 1 km to the river and take the Chao Phraya Express Boat to the pier on the Phra Arthit Road which is a short walk from the Khao Ran Road.