Nakhon Ratchasima Railway Station was first opened in 1900 as the Eastern Terminus for railway line to Bangkok. The original train station was destroyed during World War II by an Allied bombing raid, and the current station building was built in 1955.

There are 3 platforms for passenger trains. Trains from Bangkok tend to arrive on Platform 1, and depart to Bangkok from Platform 3 which is accessed by crossing over the railway tracks at a point in the centre of the station. Short distance local trains tend to depart from Platform 2.

Despite being a Class 1 Railway Station, Nakhon Ratchasima Railway Station has a poor range of facilities. This station does not a left luggage office and it does not have any kind of sit down restaurant or cafe on the station grounds.

Buying Tickets at the Train Station

You can purchase train tickets for the day of travel and advance tickets from the ticket counters in the main station building.

The ticket counter staff at Nakhon Ratchasima Railway Station have a poor level of English because this is station has a relatively small number of foreign visitors passing through. Speakers of other languages, such as French or Chinese, will be unable to communicate with the ticket counter staff unless they understand the Thai language or English.

Use the Search Box below to buy train tickets from Nakhon Ratchasima to Bangkok online:

Train tickets for other shorter journeys such as to Ayutthaya or Ubon Ratchathani must be purchased at the Railway Station.

Motorbike taxis and tuk-tuks wait outside the main entrance to the Railway Station in the car park to the left hand side as you exit. Expect to pay no more than 40 to 60 THB to destinations in the Old Town area, although if you are a foreign tourist you may be asked to pay more. Agree a price in advance.

Shared taxis ply the main road outside the Railway Station and run to the city’s main bus station. The English language skills of the driver will be poor and you will need to communicate in Thai. The word for bus station in Thai is ‘satanee rot bus‘.

There are 10 direct train services a day from Nakhon Ratchasima (Khorat) to Bangkok. 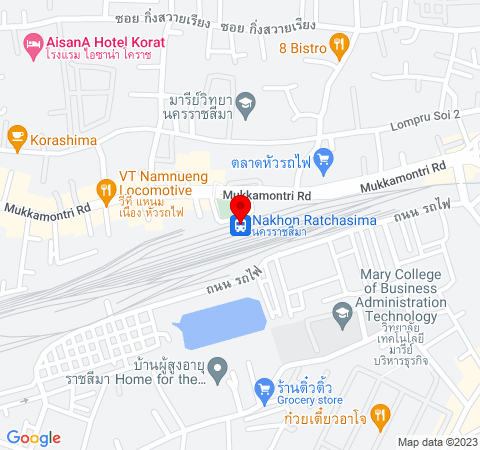