Bang Sue Grand Station is Bangkok’s newest and largest railway station which is currently being fitted out to become the main terminus for intercity and international train services in Thailand.

With a internal floor space of 274,192 sqm and 26 platforms, Bang Sue Grand Station is the largest railway station in South East Asia, larger even than the massive KL Sentral Station in Malaysia. The large size of this new station is indicative of Thailand’s aspirations to modernise and enlarge its railway operations. Hua Lamphong Railway Station, the main hub for Thai railway services since 1916, is a fraction of the size and has handled an average of 60,000 passengers a day. Bang Sue Grand Station has been designed to accommodation passenger flows of several hundred thousand  a day.

The plan to construct Bang Sue Grand Station was made in 2010. The concern of the government at the time was that the location of the main terminus Hua Lamphong Railway Station, which is right in the centre of the China Town district of Bangkok, was adding to the city’s traffic congestion problems. The view of the government at the time was that the city’s traffic problem was being exacerbated both by passengers being dropped off and picked up by cars at Hua Lamphong Railway Station, and by traffic being held up at level crossing as trains passed slowly through the city centre to reach the main terminus. Three out of the four intercity train lines in Thailand already pass through the existing Bang Sue Railway Station, so building a new train station in Bang Sue appeared to the government at the time as an easy solution to what they perceived as the negative impact of having a main railway terminus right in the centre of the city.

The design of Bang Sue Grand Station, both in terms of it dimensions and modernist architectural features, has been heavily influenced by the Chinese led Pan Asia Railway Network project. This ambitious project involves high speed railway services linking Kumming in China with Singapore via three routes, one via Myanmar, one via Laos and another via Vietnam, with all three routes meeting in Bangkok before continuing south to Singapore. Bang Sue Grand Station has been designed with these new high-speed train services in mind. Making good use of the space inside this new station will require a lot more train passengers than Thailand currently has, and the enclosed platforms are better suited to electric trains than the diesel powered engines that currently operate on all of Thailand’s existing intercity routes.

In many respects Bang Sue Grand Station is ahead of its time. A link railway from Vientiane in Laos to Kumming in China has recently been completed, however, high speed train lines linking Vientiane to Bangkok are several years away from completion. The section of high speed railway from Bangkok to Nakhon Ratchasima should become operational in 2024, however, construction of a high-speed railway line linking Nakhon Ratchasima to Vientiane has not even begun. Nor has construction of high speed railway lines in Vietnam and Myanmar. A minor amount of progress has been made on improving the train line going south from Bangkok as far as Surat Thani, but no work on a high speed train line from Bangkok through Malaysia to Singapore has commenced either. As a consequence, for the remainder of the decade Bang Sue Grand Station is likely to feel like an under utilised facility, with too few new international customers to justify the scale of the project.

The other issue with Bang Sue Grand Station is that both the railway staff and commuting public have objections to the closure of Hua Lamphong Railway Station. Bang Sue is not an end destination for most train passengers. It’s too far out of the city centre. The existing Bang Sue Station is fairly busy because it is linked to much of the city by an underground suburban train service. However, for most of the travelling public this too lower level of connectivity to the rest of Bangkok is unlikely to make Bang Sue Grand Station a more preferable arrival point than the existing main terminus, Hua Lamphong Railway Station. More and better local transport links are needed before Bang Sue Grand Station wins the approval of the travelling public.

The third level Bang Sue Grand Station has a further 10 platforms. Most of these platforms have been set aside for high speed electric train services. Currently Thailand has no electric train services so the third level of Bang Sue Grand Station is likely to remain closed off for at least another 2 years until the Bangkok to Nakhon Ratchasima high speed railway line becomes operational.

Platform space on the third level of Bang Sue Grand Station has also been set aside for the Airport Rail Link. The signs for the Airport Rail Link have already been installed although there are no Airport Link services available. The existing Airport Rail Link from Central Bangkok to Suvarnabhumi Airport doesn’t currently connect to Bang Sue Grand Station. There is also a future high speed rail link connecting Don Mueang Airport, Suvarnabumi Airport and U-Tapao Airport (near Pattaya) currently in the planning phase, however, it is unlikely to become operational any time earlier than 2024.

Use the Search Box below to buy your Thailand Train Tickets online.

For other journeys simply change the origin and destination of your journey and click to find tickets. All major routes in Thailand are available to book online, as well as train, bus and ferry tickets for travel across Asia including Vietnam, Cambodia, Malaysia, Myanmar and India.

The main local transport links to Bang Sue Grand Station currently in operation are the MRT line, and the Light Red and Dark Red SRT lines.

On the eastern side of Bang Sue Grand Station there is also a bus stop and a taxi rank. At the present time (due to a lack of demand) there are limited bus services operating to and from Grand Sue Central Station.

Bang Sue Grand Station is located 10.4 km by road to the north east of the Khao San Road. 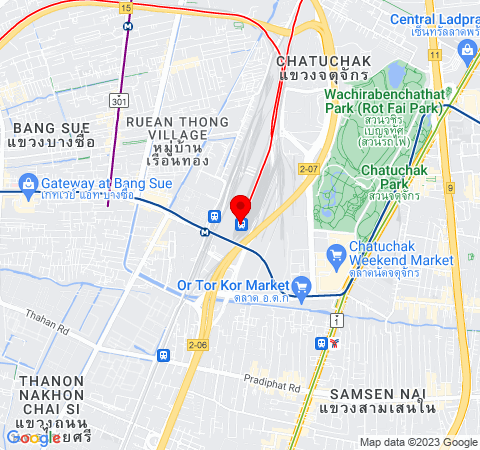 A large part of Bang Sue Grand Station, by the front entrance, is currently being put to good use as Thailand’s largest covid-19 vaccination centre. The retail space inside and outside the station building has not yet been let to any customers, and no internal partitions have been erected to house shops and restaurants.

Future of the other Train Stations in Bangkok

Exactly what will happen to each of these stations, and in particular when they might close down as a consequence of the opening of Bang Sue Grand Station, is currently not known for sure. However, on the basis of the most recent information available below are the most likely outcomes.